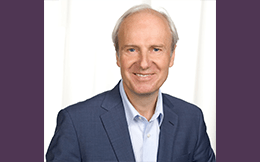 University of Natural Resources and Life Sciences, Vienna, AT

Rector and Professor of Forest Ecosystem Management at University of Natural Resources and Life Sciences, Vienna

Univ. Prof. Dipl.-Ing. Dr. Hubert Hasenauer, born on November 3, 1962 in Saalfelden, Salzburg, began studying forest sciences in 1986 at the University of Natural Resources and Life Sciences Vienna (BOKU), after having worked five years as a forester at Austrian Federal Forests (ÖBF). He graduated from BOKU in 1991 with honors, and received his doctorate in 1994, also with honors. After receiving a Fulbright fellowship, he then spent time as a visiting scholar at Virginia Tech, Blacksburg, USA, then at the University of Montana, Missoula on a Schrödinger fellowship, followed by two further research semesters at the University of Eastern Finland, Joensuu and the University of Montana, Missoula. In 1998 he received his postdoctoral lecturing qualification, and in 2007 was appointed Professor of Forest Ecosystem Management and Head of BOKU’s Institute of Silviculture.
Hasenauer has lectured in the US, England, Finland and China, chaired the Scientific Advisory Board of the European Forest Institute (EFI) for 5 years, and edited Forest Ecology and Management, one of the world’s leading forestry journals. He has published over 260 scientific papers, many in prestigious SCI journals, and supervised nearly 70 teaching and research projects in Europe, the US, Russia, Brazil, China, Bhutan, Nepal and Ethiopia on topics ranging from sustainable forestry management and silviculture to ecosystem modeling of carbon cycles and the role of forests in climate change.
Hubert Hasenauer served as Senate Chairman of BOKU from 2009 to 2016, Spokesman of the Senate Chair of the Austrian Universities from 2015 to 2016, and as a member of the Austrian Higher Education Conference from 2013 to 2016.
Professor Hasenauer became Rector of BOKU on February 1st, 2018.