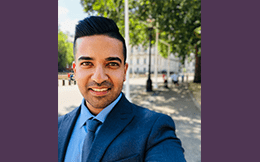 Faheem has a BSocSci in Politics and Organisational Psychology from the University of Cape Town and a post graduate in Marketing and Communications Management from the Red & Yellow School of Business. In 2017, he was named Rising Star by the South African Chamber of Commerce in the UK, having previously been ranked in the top ten strategists in South Africa and named Young Marketer of the Year. Faheem has won over 30 creative & effectiveness awards for clients spanning government, blue chip and non-profit organisations. He has consulted in over 15 countries across Europe, Asia, Middle East and Africa. Faheem cofounded The Street Store, helping clothe 350,000 homeless people in 130 cities worldwide.

Are you being heard? Find out how to communicate complex issues.

Are you being heard? Find out how to communicate complex issues